Notify me when back in stock

Be The First To Review This Product!

Help other Mango Trees Australia users shop smarter by writing reviews for products you have purchased.

Getting all the 9 parts of wooden puzzle pieces of the Egg shape back into the case. or Try to form 54 additional shapes into bird patterns Come with wood cover and solution.

The tangram is a dissection puzzle consisting of several flat shapes, called tans, which are put together to form shapes. The objective of the puzzle is to form a specific shape (given only an outline or silhouette) using all seven pieces, which may not overlap.

It is reputed to have been invented in China during the Song Dynasty, and then carried over to Europe by trading ships in the early 19th century. It became very popular in Europe for a time then, and then again during World War I. It is one of the most popular dissection puzzles in the world. A Chinese psychologist has termed the tangram "the earliest psychological test in the world", albeit one made for entertainment rather than for analysis. Snake In The Box Puzzles GP113 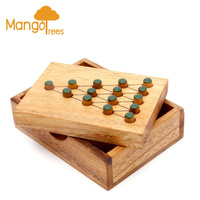